The Uniting History Foundation and Riga Jurmala Music Festival are pleased to welcome St. Petersburg Philharmonic Orchestra headed by Yuri Temirkanov and pianist George Li in Liepaja. This classical music performance will launch the Uniting History project in Liepaja. Event is made possible with the support of Liepaja City Council. 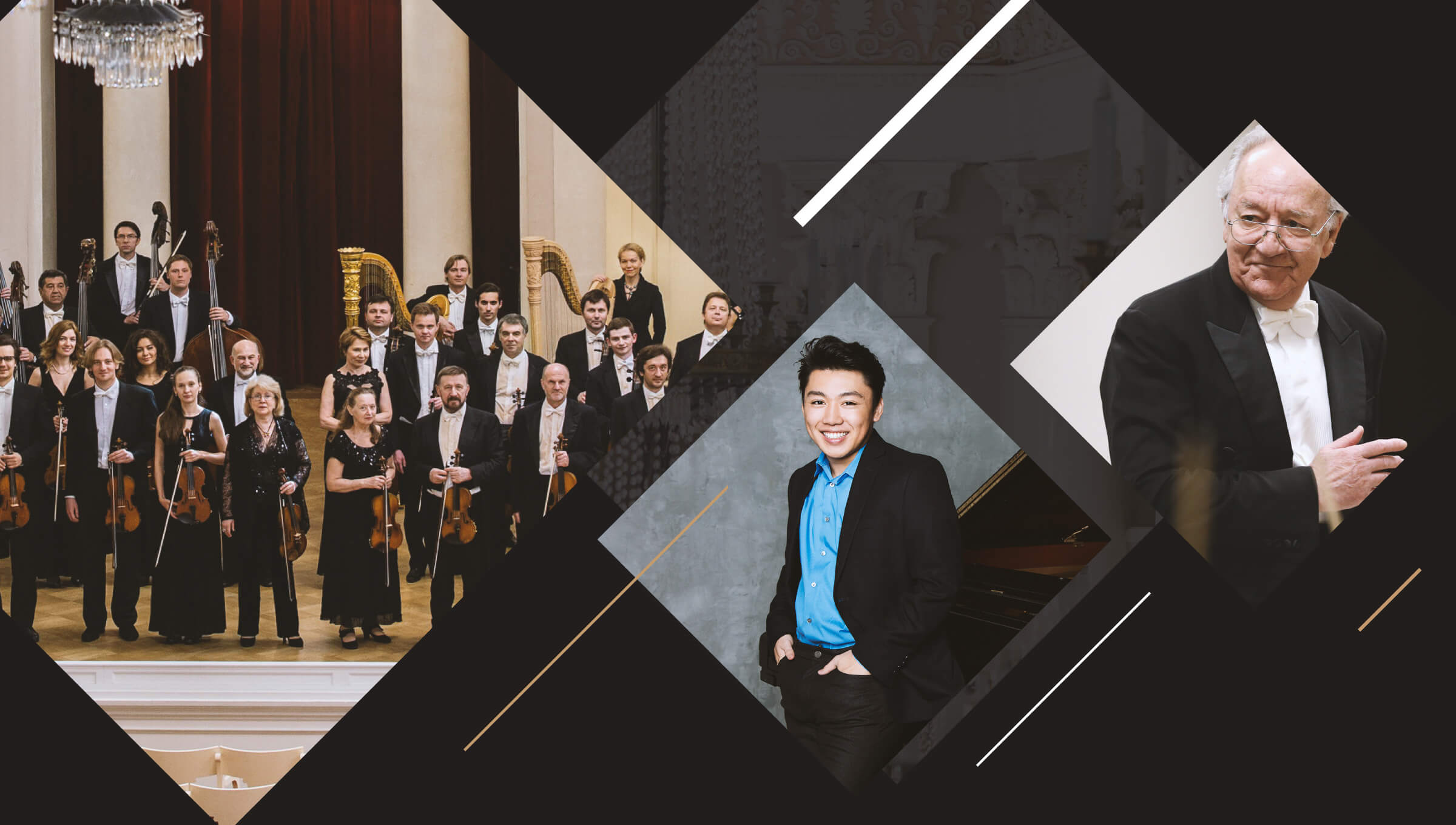 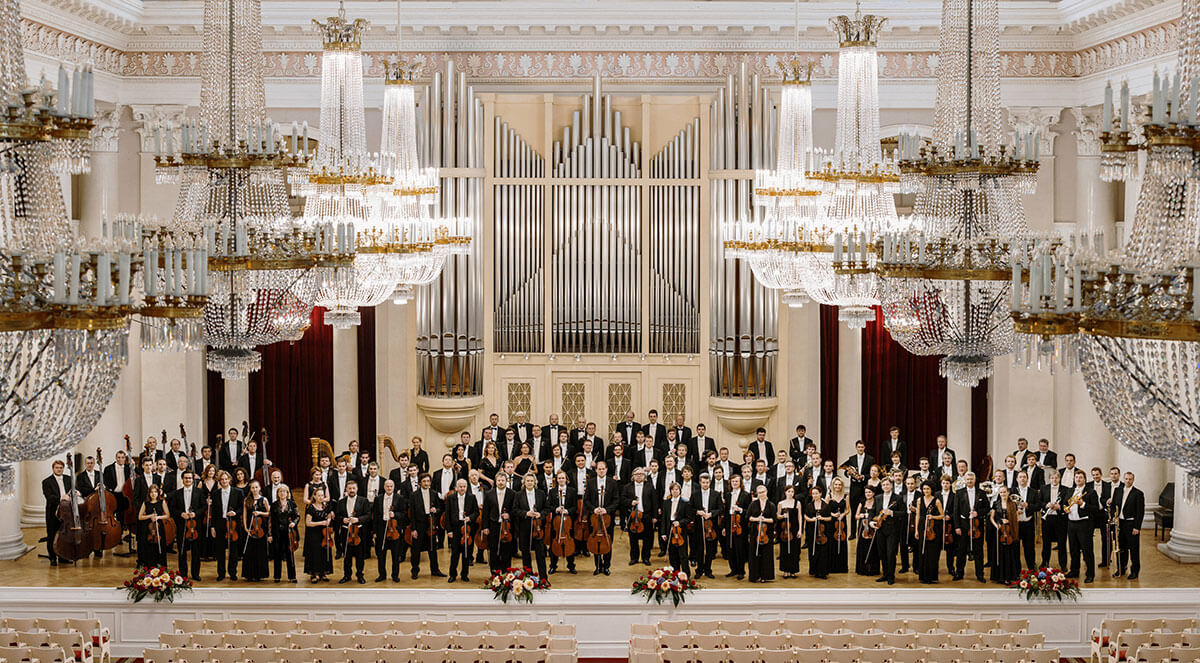 The history of the St. Petersburg Philharmonic Orchestra according to foreign press, «comprises the global elite and claims to be the most historically significant orchestra in Russia” – started with Alexander’s III decree to initiate the creation of the Court Music Choir on July 16, 1882. Later transformed into the Court Orchestra, the orchestra first performed Richard Strauss’ symphonic poems “A Hero’s life” and “Thus Spoke Zarathustra”, Mahler’s First Symphony and Bruckner’s Ninth Symphony, Scriabin’s “Poem of Ecstasy” and Stravinsky’s First Symphony. The orchestra was led by A. Nikish, R. Strauss and A. Glazunov, who dedicated the “Solemn Overture” to the orchestra. In 1917, the Court Orchestra became the State Orchestra and was directed by S. Koussevitsky. In 1921, the former hall of the Noble Assembly came into possession of the orchestra, thus opening the first Philharmonic nationwide. The unprecedented Philharmonic’s activity in its scale attracted new audience. The outstanding national artists of the orchestra went through the true conductor’s experience. A number of Western legendary conductors partnered with the orchestra: B. Walter, F. Weingartner, H. Abendroth, O. Fried, E. Kleiber, P. Monteux, and O. Klemperer, while B. Horowitz and S. Prokofiev performed solo. The orchestra mastered an extensive modern repertoire, which included the premiere of Prokofiev’s “Classical symphony” in 1918 and Shostakovich’s “First Symphony” in 1926.

In 1934 the orchestra was awarded the title «Distinguished Orchestra of the Republic» for the first time in the country. The semi centennial Mravinsky’s epoch began in 1938 – the age of meticulous work, which earned the orchestra a place among the most famous orchestras in the world. The first foreign tour of the orchestra took place in 1946 – also the first one in the history of Russian symphonic performances. Regular tours worldwide and performances at the most prestigious European festivals followed the first trip. Mravinsky’s and Shostakovich’s artistic alliance was so unique that the composer dedicated his Eight’s Symphony to it. Shostakovich’s five symphonies were performed by the conductor and the Philharmonic orchestra for the first time. It was then that the authentic tradition of interpreting famous musical scores was born. 20 th  century music plays a pivotal role in the orchestra’s program. K. Sanderling, A. Janssons, M. Janssons would alternate serving as assistant conductors, while being led by L. Stokovskiy, M. Maazel, Z. Mehta, K. Masur, E. Svetlanov, G. Rozhdenstvenskiy and composers such as B. Britten, A. Kolland, Z. Kodai, V. Lutoslavskiy, L.Berio, K. Penderecki; soloists V. Cliburn, G. Guld, A. Benedetti Michelangeli, I. Stern, S. Richter, E. Gilels, D. Oistrakh, E. Virsaladze, N. Petrov, G. Sokolov, V.Tretyakov, L. Kogan, N. Gutman, V. Krainer, V. Spivakov, A. Lyubimov.

Since 1988, the orchestra began to be headed by Yuri Temirkanov.

The repertoire of the orchestra is constantly being updated with new, including modern works – a few of them were performed for the first time in Russia: Nono’s “Il Canto Sospeso”, Borisova-Ollas’ First Symphony “The Triumph of Heaven” and Fantasy “Wunderbare Leiden”, Dutilleux’s Nocturne “Sur le même accord”  and Adams’ “Century Rolls”, concert for piano and orchestra.

Among the brightest St. Petersburg programs of the last season are Rodion Shchedrin’s recital, Verdi’s Requiem and Janáček’s Glagolitic mass, Prokofiev’s Cantata for the 20th Anniversary of the October Revolution and Mahler’s Fifth Symphony.

The 2018/2019 season’s repertoire includes such works as Shostakovich’s Eighth and Thirteenth Symphonies, Oratorio’s “Ivan the Terrible”, Prokofiev’s Third and Fifth Symphonies, Bartók’s and Lutosławski’s concertos for orchestra, Poulenc’s Double Piano Concerto, Charles Ives’ “Holidays” Symphony, Berg’s Three pieces for orchestra Op.6, Schnittke’s Fourth Violin Concerto, “Alladin” Suite and Nielsen’s “Helios” Overture. Giya Kancheli’s “Letters to friends” world premiere will take place, and within the framework of the “Art Dialogues” subscription, held in conjunction with the State Hermitage, Dutilleux’s “Starry night” (inspired by Van Gogh’s painting), Walton’s Cello Concerto and Tishchenko’s Dante’s Fifth Symphony Paradise will be performed. There will be concerts with theparticipation of the orchestra, dedicated to the 80 th  anniversary of its Artistic Director and Chief Conductor Yuri Temirkanov. Among them is a series from the traditional First Subscription, entirely dedicated to the anniversary of the Maestro, as well as the “Arts Square” International winter festival concerts. 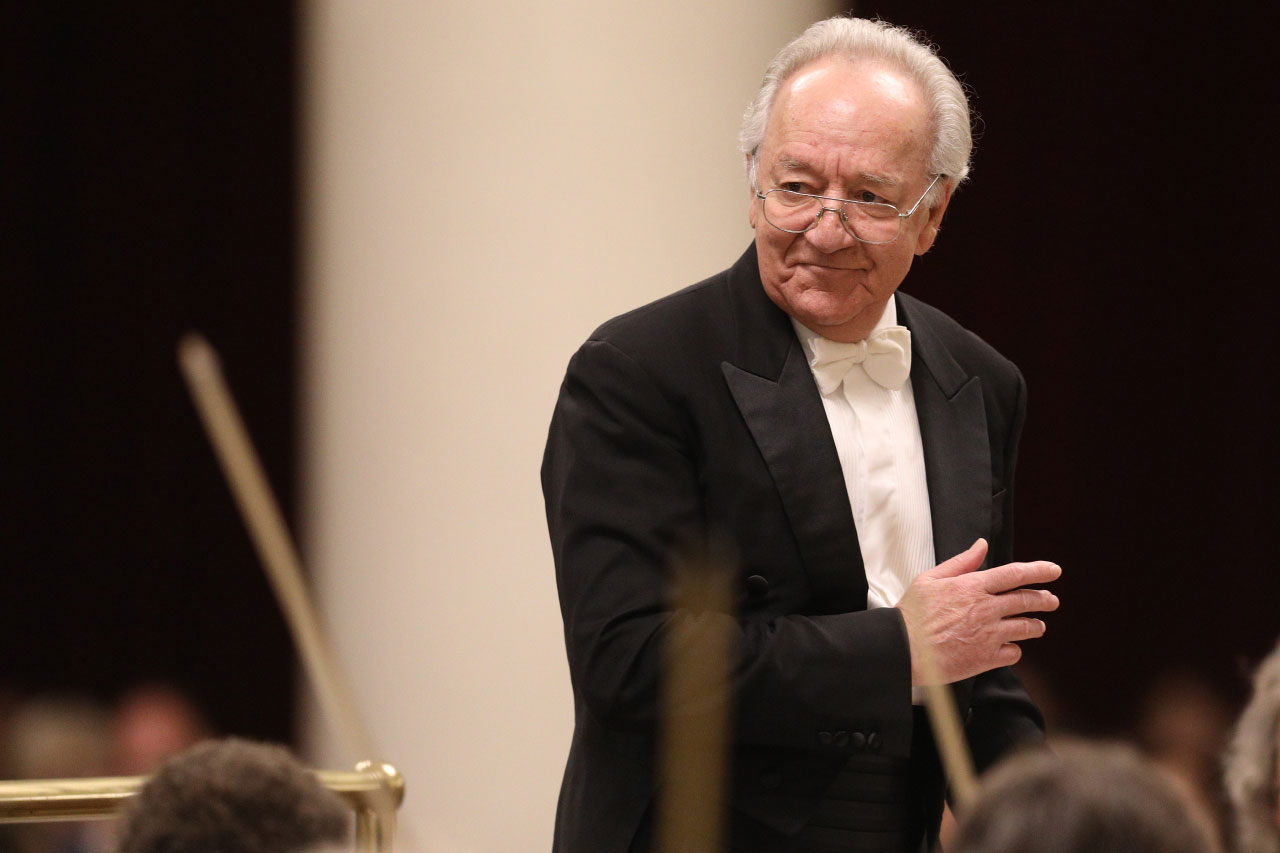 Since 1988 Yuri Temirkanov has been the Artistic Director and Chief Conductor of the St. Petersburg Philharmonic Orchestra, which the conductor regularly tours and records with.

Yuri Temirkanov was born in Nalchik, the Caucasus, and started pursuing music at the age of 9. At the age of 13, he moved to Leningrad and continued his studies at the Saint-Petersburg Conservatory’s Secondary Music School specializing in violin, then graduated from the Saint-Petersburg Conservatory majoring in viola and symphony conducting. In 1966 he won the All-Union Conductors Competition and at Kirill Kondrashin’s invitation toured in Europe and the United States with the Moscow Philharmonic orchestra and the legendary violinist David Oistrakh.

In 1967, Yuri Temirkanov debuted with the Leningrad Philharmonic orchestra, the Honored orchestra of the Republic and at Yevgeny Mravinsky’s initiative became the assistant conductor. In 1968-1976 he served as a chief conductor of the Leningrad Philharmonic Symphony orchestra (now the Academic Symphony orchestra); in 1976-1988 he was the chief conductor of the Kirov (Mariinsky) theatre. During this time, the repertoire consisted of Temirkanov’s masterpiece performances such as “Eugene Onegin” (Temirkanov’s production of the Opera is featured in the theater nowadays) and Tchaikovsky‘s “Queen of spades”, Prokofiev’s “War and peace”, Petrov’s “Peter the Great”, Shchedrin‘s “Dead souls”. The troupe began to tour actively (USA, Japan, Europe), and theater’s Symphony concerts were again put into practice worldwide.

Maestro Temirkanov has received numerous Russian and international awards. He is the recipient of the Order “For Merit for the Fatherland” (1998, 2003, 2008, 2013), People’s artist of the USSR,  laureate of State Prizes and the Presidential award,  Commander of the Order of the Star of Italy and the Japanese Order of the Rising sun. Twice, in 2003 and 2007, he was awarded the prestigious Abbiati prize in the nomination “Best conductor”; in 2003 Yuri Temirkanov was named the “Conductor of the year” in Italy. Maestro – the winner of the Arturo Benedetti Michelangeli award and La Fenice Theatre Fund’s award “Life in music”, the recipient of Santa Cecilia Academy’s and the St. Petersburg and Moscow conservatories honorary titles. In 2015, for the first time ever, Yuri Temirkanov was appointed the life honorary conductor of Santa Cecilia national academy orchestra and choir in Rome; in 2016 he was awarded the Italian order “Arca d’oro” (“Golden ark”). On June 12, 2018 Yuri Temirkanov was awarded the State Prize of Russian Federation for his outstanding contribution to the development of national and world music culture. 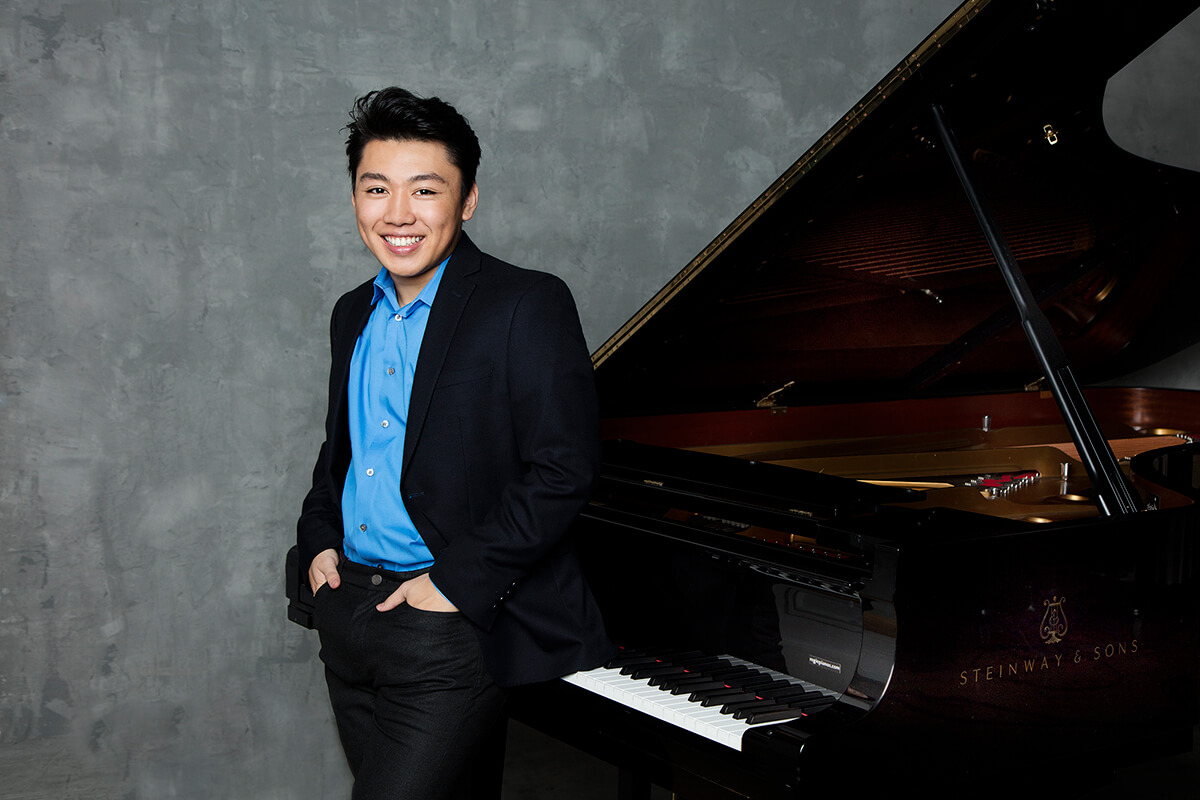 Since winning the Silver Medal at the 2015 International Tchaikovsky Competition, Li has rapidly established a major international reputation and performs regularly with some of the world’s leading orchestras and conductors such as Dudamel, Gaffigan, Gergiev, Gimeno, Honeck, Orozco-Estrada, Petrenko, Robertson, Slatkin, Temirkanov, Tilson Thomas, Long Yu and Xian Zhang.
‍
George Li gave his first public performance at Boston’s Steinway Hall at the age of ten and in 2011, performed for President Obama at the White House in an evening honoring Chancellor Angela Merkel. Among Li’s many prizes, he was the recipient of the 2016 Avery Fisher Career Grant, a recipient of the 2012 Gilmore Young Artist Award, and the First Prize winner of the 2010 Young Concert Artists International Auditions. He is currently pursuing an Artist Diploma at the New England Conservatory, continuing to work with Wha Kyung Byun. When not playing piano, George is an avid reader and photographer, as well as a sports fanatic.