On 9 August 2021, the solo concert of the Russian pianism star Mikhail Pletnev organized by the Uniting History Foundation and the Riga Jurmala Music Festival was held in the Great Amber concert hall in Liepāja. The experienced pianist took the audience on an intimate journey through the piano pieces of Beethoven and Tchaikovsky, which sounded like timeless gems in the outstanding acoustics of the Great Amber concert hall in Liepāja. In the special manner characteristic only to him, Pletnev took visitors through the characteristic phrasing of the 18th and 19th centuries and the muted style of performance, leaving room for the listeners' thoughts and views. 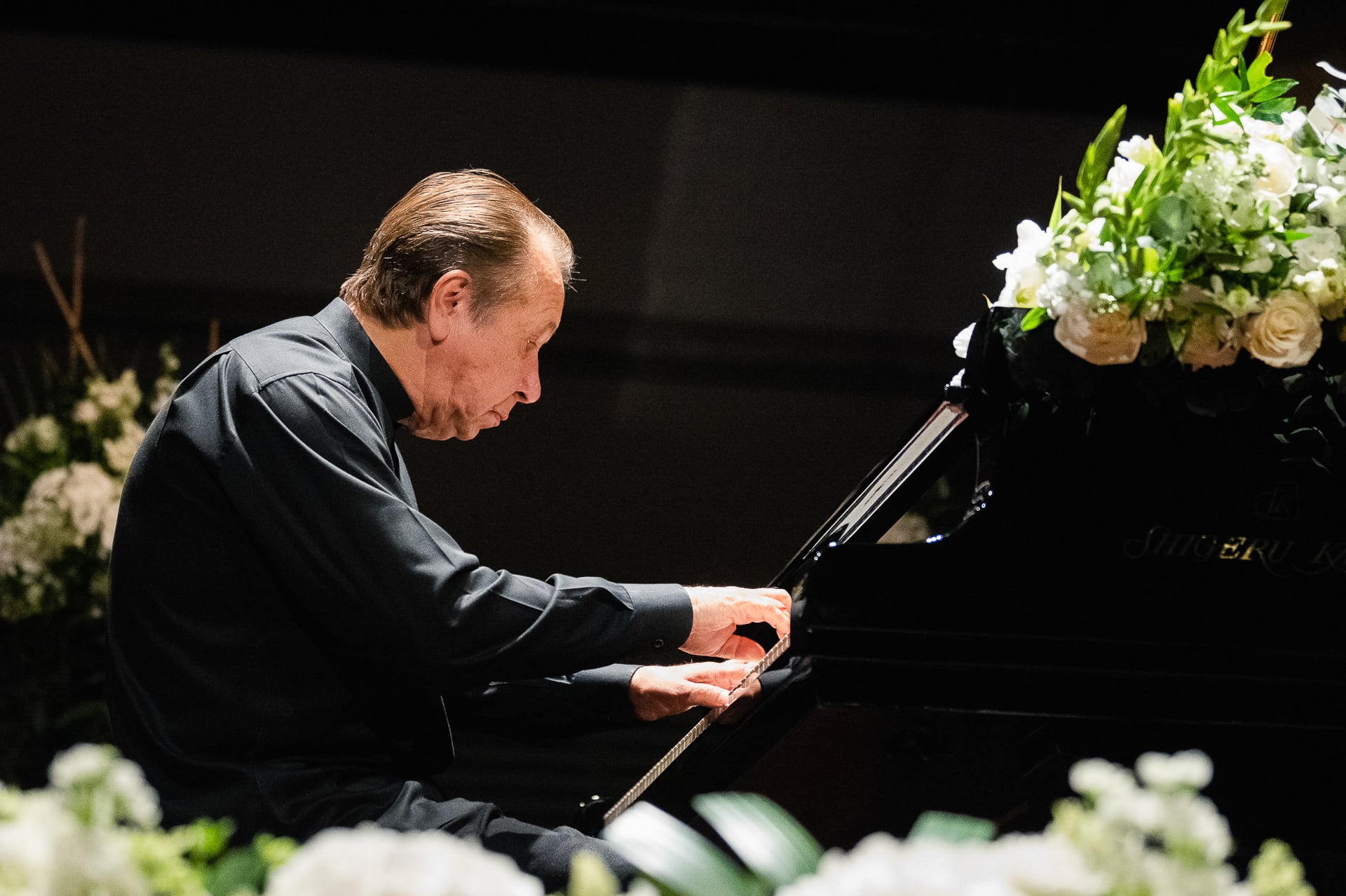 During his career of more than 40 years, Mikhail Pletnev has proven himself as an outstanding pianist, conductor and a creative performer of a wide, diverse repertoire. For his debut in the Great Amber concert hall in Liepāja, the maestro had chosen the gems of the piano solo repertoire. The first part of the concert featured Ludwig van Beethoven's first and last piano sonata, but the second part presented Peter Tchaikovsky's cycle The Seasons (Les Saisons). The cycle consists of 12 short compositions for piano, each dedicated to a month of the year.

“We are really glad that, despite the difficulties caused by the pandemic, we were able to offer you this high-class musical event. As you know, due to the restrictions caused by COVID-19, only two weeks before the event we had to announce changes among the participants of the concert – this time we could not offer to the audience the long-awaited meeting with the prestigious, legendary St. Petersburg Philharmonic Orchestra, but we are grateful to our partners and Mr. Pletnev for the flexibility and willingness to find solutions so that the concert on 9 August could take place. On behalf of the foundation, I would like to thank those people whose persistent work over several months allowed us to meet at this event celebrating music in Liepāja – the management of the Great Amber concert hall in Liepāja, the management of the Riga Jurmala Music Festival, and the whole team. We look forward to just as successful cooperation in the future!” says Elina Sklar, the executive director of the Uniting History Foundation.

Mikhail Pletnev's work has been repeatedly nominated for the prestigious Grammy Award, which the pianist won in 2006. He has also received the awards of the magazines Gramophone and The New Yorker for his albums. In 1990, Pletnev founded the first independent orchestra in Russian history. In support of his vision of a future model for the art of musical performance, many of Russia's greatest musicians began working in the Russian National Orchestra. Pletnev is still the orchestra's artistic director and chief conductor, under whose leadership the orchestra has gained the fame and reputation of a world-class orchestra. 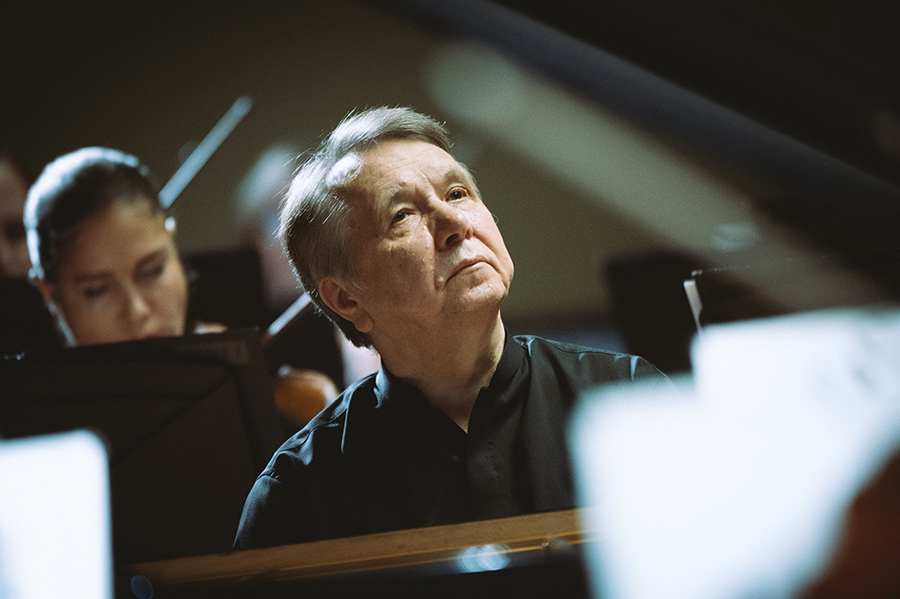 Mikhail Pletnev (1958) is considered one of the most unusual musicians of the current era, because he has been equally successful as a pianist, conductor and composer.
‍
He was born in Arkhangelsk to a musical family, and began his studies at the Kazan State Conservatory music school before transferring to the Central Music School of the Moscow State Tchaikovsky Conservatory. In 1978, he won 1st place and a Gold medal at the 6th International Tchaikovsky Piano Competition. Immediately after that, he began an intensive international concert schedule - both solo concerts and performances with world-class orchestras. 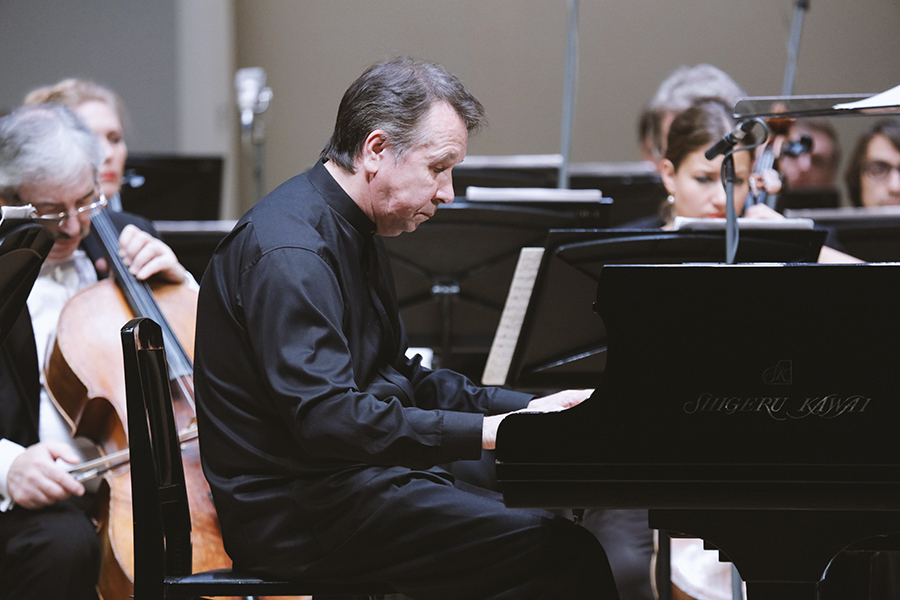 Pletnev has played with the Berlin, London, Munich, Israel and Czech Philharmonic Orchestras, the San FranCisco, Pittsburgh and Berlin Symphony Orchestras, the Orchestre National de France and many others. Both the audience and his colleagues are always excited by his perfect technique, fine sense of style and the freshness of his interpretation. “Pletnev performs each composition as his own. His interpretations are staggering. It is unlikely that any other pianist can do the same” (BBC Music Magazine).His 1988 invitation to perform at the superpower conference in Washington D.C. led to him befriending Mikhail Gorbachev.

In 1990 Pletnev founded Russia’s first-ever independent orchestra. Despite Gorbachev’s support, this was a risky step. It was Pletnev’s reputation and passion which allowed this long-held dream to succeed. Supporting his vision of the future performing arts model, he founded the Russian National Orchestra which united many of Russia’s best musicians. Under Pletnev’s leadership, the orchestra has gained worldwide fame and a leading reputation. Pletnev calls the Russian National Orchestra his greatest source of joy, and he is still its Artistic Director and Principal Conductor.

Pletnev’s performances and recordings demonstrate his capabilities as a performer of a wide and varied repertoire both as a pianist and conductor: “from Pletnev's fingers and brain come ideas that vitalise the music and make it teem with freshness and wit.” (London Telegraph).

In 2006, Pletnev’s arrangement of Prokofiev’s Cinderella for two pianos, recorded with Martha Argerich, won a Grammy award. He was also nominated for a Grammy for a recording of Rachmaninoff and Prokofiev piano concertos, in which the Russian National Orchestra was conducted by Mstislav Rostropovich. He won a Gramophone Classical Music Award in 1996 for his album of Domenico Scarlatti sonatas, and in 2007, The New Yorker made his album of all Beethoven’s symphonies and piano concertos (Deutsche Grammophon) Album of the Year.
‍
Pletnev’s works as a composer include works for orchestra as well as piano, strings and voice. His transcriptions of Tchaikovsky’s The Nutcracker and The Sleeping Beauty for piano (as well as recordings of Piano Concerto No. 2 and The Seasons) were included by Philips Classics in its anthology of the best 20th century pianists.
‍
Pletnev has received an Order of Merit for the Fatherland (2007) and a Platonov Award (2014) for depth and harmony of interpretations of the world musical heritage. In 2006 he founded the Mikhail Pletnev Fund to support national culture.
Today, he is one of Russia’s most influential artists. But he still calls himself merely a musician.